The Call For A National Conference On Security; A Step In The Right Direction? 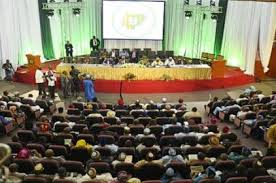 “Nations rise to the challenges that each epoch presents. It is imperative therefore, that in our march to nationhood, we have to be dynamic in our approach and response to the problems, even as we seek solutions to them. We cannot proffer yesterday’s solutions to today’s problems.” – Olusegun Obasanjo

My lords, before I proceed to the arguments for today, permit me to produce before you the stated aim and objective of the last national conference held in 2014. It reads; The National Conference is a national project, a sincere and fundamental undertaking, aimed at realistically examining and genuinely resolving long-standing impediments to our cohesion and harmonious development and a truly united nation.

My lords, while this aim is susceptible to different interpretations, only one conclusion can be drawn from it; it was a national conference specifically intended to tackle nothing more than the problems facing cohesion and harmonious living in Nigeria. No wonder the paramount resolutions of the conference were heavily centered on resolving the issue of marginalization, power sharing and restructuring in Nigeria. In fact, former president Jonathan, while receiving the report of the last national conference, admitted that it was very clear that the national conference created an avenue to devise a way of addressing and resolving our differences amicably.

You see, even though there were problems of insecurity at the time of the last national conference, it was relegated to the backseat, but now that the issue has become very serious, and what we thought was insignificant is now posing a threat to our livelihood, we can no longer ignore or treat it with nonchalance. It has gotten to the point where both the House of Lords in Great Britain and the Presidency in United States have exhibited great concerns over the need to quickly tackle Nigeria’s security issue. Even here at home, it is now bad that everyone is advised to develop a crocodile skin to the recurrent gory incidents of suicide bombings and herdsmen mayhem splashed on the pages of our dailies. Indeed, we must take specific actions to tackle it and that action starts with the convergence of patriots and security experts to discuss the issue of our national security.

My Lords, the issue of insecurity today is burrowing hard and fast to the foundation of our existence as one nation. Without doubt, everyone except the perpetrators of this havoc is now in great anxiety that we are reaching the brink of a catastrophic situation where if we do not take quick actions to correct the situation, it may no longer be possible to hold danger at bay. You see, before we get to the point where everything snowballs into another civil war where countrymen would lose total confidence in the ability of the present day government to provide security for their lives and properties, we must take quick actions and that action begins with the national conference on security.

Counsel on the other side may opine that the resolutions of the past national conferences have not always been implemented, so why waste time and resources with another one. He may even say that if the resolutions are to be implemented, the question of the constitutionality of the conference would arise which would pose another set of difficulties to its implementation. Truth be told, if he says all or any of these, he would have almost exhibited a good demonstration of history and the letters of the law, save for some misconceptions on his part. First of all, we must understand, on the point of history, that there has been no national conference whose focus has been entirely on the issue of security in Nigeria. If at all security is discussed, it is only an issue brought up in the AOB section of the conference. And the fact that the resolution of the last national conference has not been implemented, does not justify abandoning a conference whose purpose is to find a lasting solution to the daily killing and kidnapping closing in on our abode day by day.

Secondly, on the point of law, the purpose of democracy is such that even after the people have elected their representatives to legislate on their behalf, there is also room for the people to make contributions into the state affairs of the country without usurping the authority of their representatives. After all, section 14 of the supreme law of the land still puts sovereignty with the people notwithstanding their actions to evolve strategies and tactics to strengthen the security and unity of Nigeria for the benefit of successor generations.

As I draw the curtain on my arguments in today’s proceedings, the wise words of former President Olusegun Obasanjo in his letter to President Buhari come to limelight. He stated, we are in a democracy, and in a democracy; elected leaders govern at the behest of the citizenry. As challenges emerge, season after season, leaders must respond with best available strategies to ensure that the ship of state remains undeterred in its voyage. Ladies and gentlemen, we have wasted too much time and resources, bickering over sectional versions of what define reality. This is an open-ended luxury we can no longer afford. Let us move forward, with honest conviction and patriotic courage, to strengthen this Republic, and get it to work better and brighter, for all of us, to the glory of God. I rest my case!

ONLY A STEP TOWARDS DESTRUCTION

Government is not reason; it is not eloquent; it is force. Like fire, it is a dangerous servant and a fearful master.” – George Washington

As a university student, with a number of group assignmfents and projects to take on, I have learnt how to make people work, when to make people work and exactly which kind of people can be entrusted with tasks. Most importantly, however, I have also learnt that you can definitely not get some tasks done when you bring in the wrong team of people on board. Quite clearly, one cannot reasonably anticipate a rush work to be done finely by a slowcoach. When the attitude of the worker does not commensurate with the altitude of the assignment, failure, and in worse scenarios, hazards become inevitable.

Sadly, this analogy is true of the situation of things in Nigeria. We have come so far as a country on this long journey of backwardness, stopped at several hazardous milestones – from the Aba Women’s Riots of 1929 to the emergence of the terrorist sect, Boko Haram in 2002 – and have eventually come to the terse conclusion that Nigeria is indeed headed for the rocks and must be rescued speedily. It is in a bid to salvage this nation that a number of patriots and patriarchs have suggested that a viable solution was to call for a national conference on insecurity.

A national conference on insecurity? How can we bring ourselves to that? For a nation like ours, so insecure that many lives and property are lost daily, do we have the luxury of free time to assemble nationals from different sections and sectors of the country, engage in long useless talks about the obvious problems of the country and come up with piles and piles of reports on their recommendation that will take the slowcoach we have as president three years to read and maybe not finish? Do we have the luxury of resources or the courage to bear the brunt of squandering resources on feeding, accommodation and upkeep of thousands of rich folks who will feed off the minimal financial resources of the country for several days? As a matter of fact, neither the time nor the money do we have – nor do we need them – all we have got is the will to wrestle out of the mire of insecurity and the right leadership that will lead us upfront.

My Lords, advocates of the national conference on insecurity may rely on the democratic nature of the process, but it amounts to nothing other than risky dereliction of duty on the part of the government to vest the power to decide on security issues on common citizens. The letters of the law are clear on this fact: Chapter II of the 1999 Constitution empowers the government, and I emphasize, the government alone, to legislate, make policies and implement laws and policies on insecurity. While we may continue to preach that every citizen has a duty to safeguard the security of his society and the country, this shall only be by remaining loyal to one’s country and acting as informants for the armed forces. It is never for every Tayo, Dino and Hamid to poke their noses into sensitive national affairs like security, all in the name of patriotism. So, whenever it comes to the citizens’ contribution to security, the mantra must be, do your best and leave the rest; but when it comes to the government’s responsibilities in ensuring security, it is, Good, better, best/ you should never rest/ until your good is better/and your better is best.

Surprisingly, my lords, it does not only amount to dereliction of duty but also a risky move to call for a national conference on insecurity. Our nation is a political house of cards – among many citizens that one thinks are working for the progress of the country are green snakes who work underneath against the common cause. It is not unimaginable to think that among the circle of supposed national patriarchs are loyalists to the cause of the terrorist sect Boko Haram. Neither is it unbelievable that it is natural for man to pursue his passion ruthlessly. With the probability of the explosion of friendly fire, assembling people from different walks of life to a national conference on insecurity is signing a death pact unconsciously.

As I put my case to rest, I will not thread the dangerous path taken by the opposing counsel who punctured his own arguments by mentioning that the resolutions of the last conference has yet to be implemented. My lords, it is dishonest to dispute facts and dishonourable to apply the correct facts wrongly. The opposing counsel has justified that the failure of the implementation of the last national conference has no bearing on the success or failure of the proposed national conference on insecurity. What a misdirection of this noble court! From ages, the importance of learning from one’s history has never been put to question. If the opposing counsel wants to come up with different ideals than we are accustomed to, we must watch out, flee for cover, and probably call for a national conference on the insecurity of his ideals.