2019 TASUED SPEECH QUEST: A SUCCESS OR A DISAPPOINTMENT? 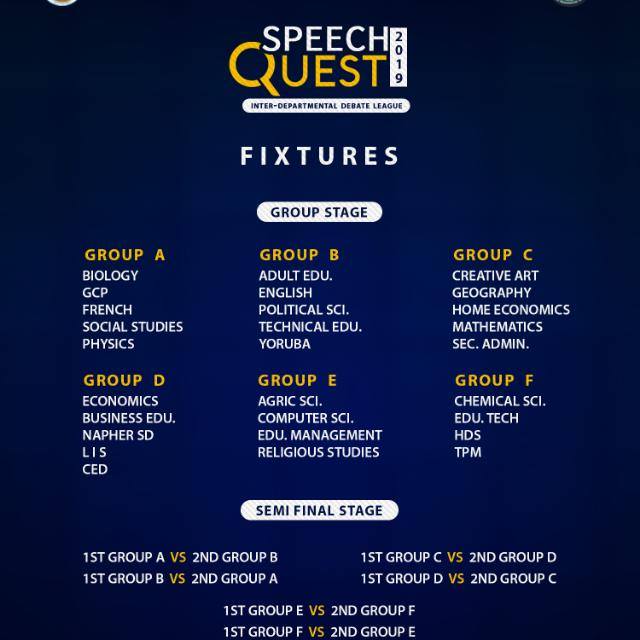 The answer is nothing but the former!

Many are familiar with the saying, “the grave is the richest place on earth” and this, I believe is as a result of the large number of unused talents which has continued to breed in the minds of people yet no opportunity has been created to show it to the world. This, was the case in TASUED for so many years not until the early months of 2019 when the 11th TASUEDSU VP, Nwankwo Vivian came up with the idea of creating a platform where the potentials of students in line with effective and efficient communication could be brought to bare;and this was tagged “Speech Quest”.

Bringing about 27 departments from the 5 colleges that exists in the school together, the Quest gave the students the opportunity to express their opinions in their own words and everyone got to know that voices were rising from “Ijagun”.

Now, to the question of the Speech Quest ’19 either being a success or not, I would want to believe that any other answer apart from success is like a sharp knock on the head of a day old baby – a sheer act of wickedness! Undoubtedly, so many challenges rose alongside the organising of the quest and after but should that make us conclude it as being a disappointment? Or does my opposing counsel mean disappointment in terms of winners not getting the said amount promised? If yes, then it saddens me to know that he has joined the league of those who prioritize money over value.

Being one of the participants of the Quest, I had the opportunity to come out my shell and show the world want I had imbedded in me and so I believe it was for other participants. If my opposing counsel feels like comparing TASUED Speech Quest to UI Jaw War, I would plead he comes out of the dark as it should be noted, Jaw War has been in the business for some years while Speech Quest is just starting and Jaw War, I believe, at inception had its sheer of weakness but for that reason, was it condemned? No! Why then should Speech Quest be? If in TASUED there could be something to get the eyes and ear of students glued without having to attend to the language of their stomach, I believe it’s worth appraising.

In conclusion, Speech Quest ’19 did not just remain at the level of being a success but is now a seed that has fallen on the right soil that would continue to yield good result. My lord, what makes a thing successful other than its objectives fully achieved? TASUED Speech Quest ’19 has its objectives achieved therefore it is nothing but a success!

Without mincing word, one of the most beautiful quotes that I have fallen in love with is that of blaming yourself when other people disappoint you. It goes thus: “don’t blame people for disappointing you, blame yourself for expecting too much from them”. Going from an academic school of thought, TSQ was the best programme on campus this semester. It was patterned along the programme of activities; one of the processes that form a curriculum.

Nobody on this earth is perfect. Everybody has their flaws; everybody has their dark sides. Even the seven churches mentioned in the book of Revelation of the Christian bible have their flaws. Regardless of how inspiring, innovative, and invigorating the Quest was, it had its flaws. They are so minute that it take a powerful microscopic heart, hand and head to notice. This flaws culminated into a big disappointment!

Milord, the collection of a single drop of water makes an ocean and a single tree makes a forest. A single leak in a car tank will not reflect immediately on the car’s dashboard but it will reflect after a journey of a mile or two. We need to curb this leak before it results into a show of national disgrace like our ‘slapping and boxing senator’. Lest I become a loquacious fool, one who deserts the clearly blazed path and beats about the bush. I will rather take on my drum and set to it; and I request you to take on the ‘agbádá’ of concentration, the ‘abetí-ajá’ of open-mindedness and the ‘sálúbàtà’ of deep reasoning.

Milord, TSQ was not transparent enough. It lacks the ingredients of transparency required to prepare a delicious dish whose aroma will be pleasing to all men. Can you believe that the prizes for the three winners were slashed? Going with the original plan, the winners should go home with #50,000, #30,000 and #10,000 for the first, second and third position respectively. At the end, the winners went home with #25,000, #15,000 and #5,000. The question is why would you promise what you cannot fulfill? Your honour, I am not through yet. Even though the Quest cut across the 27 departments on campus and it lasted for three days, the results for the group and semi-final stage were not announced at the venue. The results was sent to the participants on WhatsApp. Regardless of the reason(s) for this, it shows one thing – lack of transparency!

Continuing further, milord, the judges were partisan. They publicly displayed affection towards some sets of participants as against the ethics and standard of a competition. What do you expect when the same set of judges judged throughout the competition? Many things are wrong with the Quest, milord. I would have recommended the organizer to meet with the outgoing Director of Social, but I am afraid they may award the winners based on highest bidder. But I don’t have a business with that, my business is simple, this honourable court must protect history by ruling that this programme is a big disappointment, now!