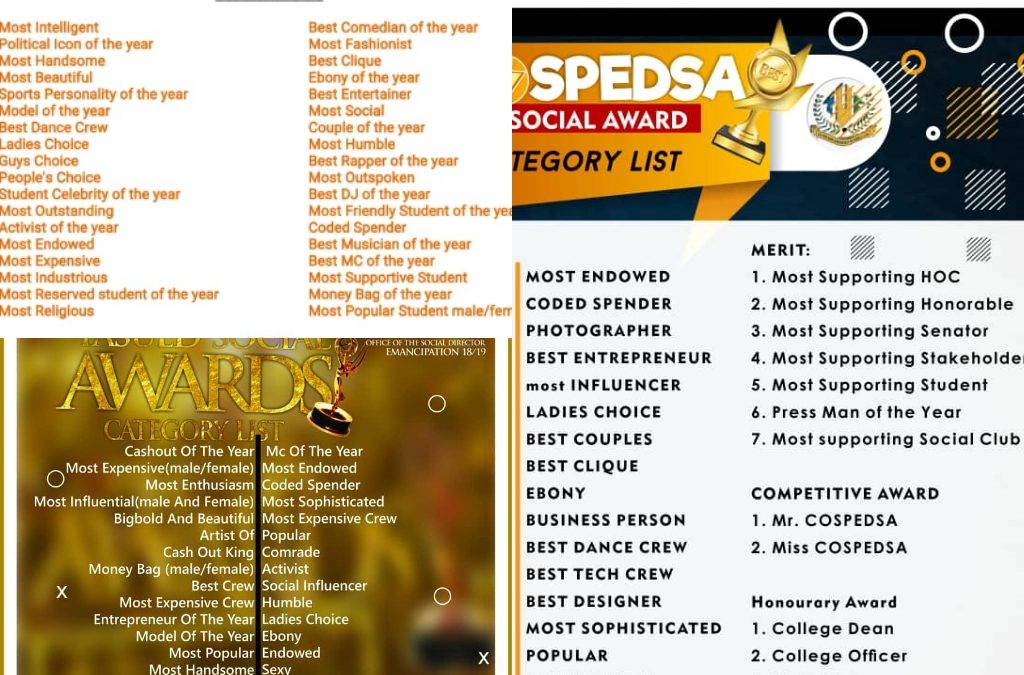 Even a day-old baby knows it’s a NO!

My lord, social awards in TASUED is nothing to write home about. This may seem as an attack on the activity, but my question is “should awards be based on merit or money?” If it is on merit, then I would say, the award being given deserves nothing but censure.
It is known by majority of the students in TASUED that the awards being given out is often done on the basis of affluence and not on qualification or potential but should that really be? Why have a “most intelligent” or “most outspoken” student who cannot speak for himself but have to rely on the help of money to do that for him or her? Social or not, awards should be given based on potentials and not on “how-much-you-can-pay ideology.” Quite unfortunate,this is not the case in my prestigious school, Tai Solarin University of Education.

If I may ask, why give a watch to a prisoner when the timekeeper lacks one? Why give awards to undeserved souls when those who really merit it are out there? TASUEDITES as I see, have been so engrossed in lies that they fail to see the truth. My opponent, who may seem to be supporting the idea is indirectly advocating that we have more educated illiterates in the country by continuing the awards as it is.

May I ask my Lord, the reason those in charge have resorted to collecting money from the aspirants before awarding them. Is it because they don’t trust the products of the school they also attend? Or is it being done just to raise funds? If it is anything close to the second reason then it should not be tagged “social awards” but rather “bidder awards.” The end result of giving awards which most people believe is so those awarded could represent the school well wherever they find themselves but with the way things are going, could this really be achieved?

Another question my Lord is that is this really award-giving Bazaar where the highest pay to get the goods? What would have been the case if Wole Soyinka had bought his way through 1986 to get the novel prize award?

Concluding this, Philip Sydney when talking to other poets said “all poets should write following a tradition and this tradition cannot be inherited but can only be achieved through hard labour”. The key word here is hard labour which implies that if the social awards should really be appraised then it should be based on merit and not money. Money should not be the wings with which we fly. I rest my case!

Gratitude is not only the greatest virtues, but the parent of others.

My Lord! You will agree with me that appreciation can make a day, even change a life. Our willingness to put it into words and actions is all that is required. Pardon me my lord! It has been a long time away from your presence. We are still recovering from the arduous journey of the recently ended semester – all thanks to ASUU Strike! In continuation, my lord, we must cast aside every veil of ignorance and must not let the thick fog of callousness and obtuseness becloud our sense of reasoning. The purpose of true education is to teach one to teach extensively and critically, we must try to corrode the blade of ignorance with the moisture and oxygen of deep thinking, thoughtful reflection and sound reasoning. TASUED Social Awards deserve appraisal, approval and assessment from the students’ populace. It shouldn’t get censured on adverse opinion or leaning formed without just grounds neither before an insufficient knowledge. It is an insult and an indirect way of telling the TASUEDSU, Colleges and all the Departmental Directors of Social that their presence is not needed and the preparation for this year Social Awards is already a failure right before its launching! On what ground? One may asked. On the basis of its abilities to promote debauchery, depravity and dissoluteness coupled with it lack of transparency, my opposing counsel will answer. It is such a baseless allegations, my lord!

Going further, Tasued Social Awards is aimed at rewarding students’ who are performing wonderfully well outside the four walls of classroom. Awards like ‘Best Graphics Designer’, ‘Student Activist’, ‘Blogger of the Year’, etc. are available to students who merit such awards. Censuring the awards on account of lack of transparency on the part of the organizer can be a negative vibes to the awardee who are striving earnestly to be of positive value to themselves and the society at large. ‘Larrysobo’ jokes can crack your ribs so hard that the University Health Centre will reject you on account of too many ‘joker-bullets’ in you, ‘Dharmxy’ rap can teleport you from stuffy bedsit and ‘LAS’ activism keeps the hope of Nigerians alive. My lord, with tens of thousands of students’ contents being disgorged out yearly from the bowel of our educational institution, we need no further soothsayer that the youth future is in their hands if and only if they can think outside the box. They have started thinking outside the box and all we can think of encouraging them with is by censure. What a confused generation!

In conclusion my lord, Shouldn’t we honour those who are in support of censuring our prestigious awards the title ‘Champion of Retrogression’ after Baroka, the Chief of Ilujinle in the play “The Lion and the Jewel” by Prof. Wole Soyinka. Baroka’s trait is equally feasible in my opposing counsel as they both stood against the development of their community. They have forgotten that the world is changing at the speed of light and it is either they adapt to the changes or get crush by the wheel of change.