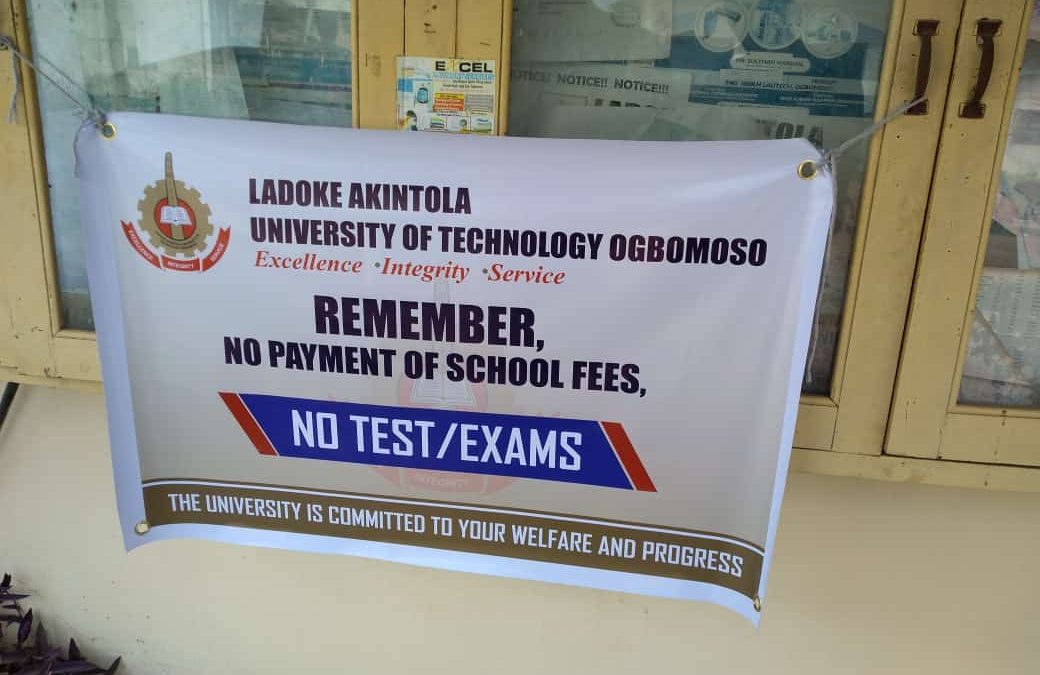 My Lords, it is great to be back after few weeks off the court, and it is a pleasure to present this topic with glaring answers to you — Is the ‘no tuition, no tests/exams policy’ necessary?

First, I would like to introduce to you the fact that the news of this policy has been in circulation for weeks, which shows that the school management mean business with the policy. However, it was quite surprising when I saw students at various centres who are yet to pay up. It was not days before the test that the school announced the effectiveness of this policy, nor was it weeks before. For about two to three months to the commencement of tests, mails were received concerning this policy and even every faculty, department, laboratory and library in and around the school bore the banner. This simply means that no one, and certainly not my opponent, can plead to ignorance of such policy.

LAUTECH is an institution with quite a number of staff and a lot of projects to carry out, as well as a lot of other commitments. How is the school expected to fulfil all of these if one of its means of sourcing for fund is stagnant? The institution, like many others, run on funds, and it is pertinent that the school receives them at the right time, if it is to carry out all that is required. So, where did unnecessary come in if the school as a responsible body has deemed it fit to inform students of this policy, not days or weeks to test, but months!

Again, is it not the students who clamour for development here and there? It would be hard for any student not to find faults in certain structures or processes in the school. Yes, the school needs to improve on a lot of things, but will they achieve those using stones? Of course, there’s a need for the general and acceptable means of payment: money. That, which the school has asked students to pay on time.

Furthermore, it is known that unless a student wants to forfeit a certain session, he is expected to pay up. This means in the end, all students will pay. If they will eventually pay, why not pay early, at a time that the money will be useful to the school and they will be able to utilise it? Do they expect to go into the test hall where there are no question papers or answer booklets? Or do they expect to make use of facilities which they have not paid for?

Why not tell us you want a massive dropout instead of the policy, which I think is unnecessary. This is a school which is co-owned by two states, Oyo and Osun. Two states which are among the many states finding it difficult to pay workers’ salary. Need I say most of the students of the school are from either state? You don’t expect most of us to pay the tuition fee on the first day of resumption. The school itself is in financial crisis because of the inconsistent payment of salaries by both states.

What makes this policy annoying is the fact that the tuition fee has just been hiked and the school management released a list of debtors not long before then. This is not logical at all. You release a (long)list of debtors, which cuts across all levels, then hike the tuition fee. As if that’s not enough, you make a policy saying ‘NO TUITION FEE, NO TESTS/EXAMS’. My lords, please tell me where in the world is that done? Well, it’s LAUTECH.

One more thing the school management didn’t consider is the implication of the policy. Do they not think there might be an increase in crime rate? Don’t get me wrong, even before the hike in tuition fee, or the policy, there have been series of reports of robberies and various crimes, especially in student areas, but why make a policy that may further increase the rate? They might want to have a rethink on that.

My lords, I don’t think the irresponsibility of the government of the two owner states should be suffered for by the students. This policy is only a prove that the tuition fee is what is being used to run the school. If not, explain the sudden hike in tuition fee, and then the (unnecessary) policy.

I know there are universities out there that are paying humongous amount as tuition fee, mostly private, before I chose LAUTECH which is government owned. What do you do about students who pay up before exams, but missed the tests? A make up test would only be a waste of time and resources considering they may want to change the questions. So why the stress? Or what do you do about a student who pay up halfway through the exams? Lots of questions are begging for answers here.

My lords, it will be good for all parties if the school management can review the policy, and find a long lasting way to end her financial mess instead of making a policy that is a massive drop out waiting to happen.