Should ASUU FUOYE have joined the nationwide strike? 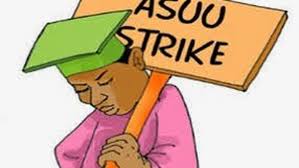 The answer is no.

Why help dig a stream you know you will only get a drip?

In 2011, Africa’s first Nobel Laureate in literature, Prof. Wole Soyinka, described Nigeria’s educational system as a colossal failure and called for the declaration of a state of emergency in the sector. M’lords at closer scrutiny one would attest to the fact that this proposed step is worthy to embark on having seen the rise and fall,  the twist and turns of the education sector in Nigeria.

Over 80 days now, the Academic Staff Union of Universities (ASUU) has been on a seemingly endless strike to curb the excessive indifference of the government to the quality of education in Nigeria. Agitations as regards funding for revitalization of public universities, Earned Academic Allowances (EAA), pension, university staff schools, and unpaid salaries have been on since past years and till date.

Similarly, some academic members of staff of Obafemi Awolowo University has also recently backed out of the ongoing strike. One would then wonder, if big institutions aforementioned who would have gained something could back out, what then is this budding citadel of learning (Federal University of Oye-Ekiti) looking for in an ocean of confusion. Milords, with the few time left, let me hastily convince you why Federal University Oye-Ekiti should not have joined the strike.

To begin with it would be apt to recollect the indefinite strike ASUU embarked upon on August 13, 2017. The agitation then was majorly the breach in the 2009 agreement of yearly release of funds that have accumulated over time even before the Federal University Oye-Ekiti was established. The same story is repeating itself again for the ongoing strike. Almost needless to say, FUOYE would be sidelined from a lot of benefits and the risk would not have been worth taking then since the school hasn’t been established when the agreement was made.

Also, the school’s involvement in the strike has also put students between the devil and the deep blue sea as regards resumption. According to the memorandum released by the acting registrar Mrs. Olayinka Adeniran-Ajayi, the resumption date stipulated was the 7th of January and till this moment lectures have not started, making students who are already in school stay idly eating the foodstuff that would have lasted a whole semester. Students at home are also being pressurized by several landlords to pay up their rents for a room they haven’t slept in.

On a further note, what this means is that there will definitely be a brief and strained semester as lectures will be taken hurriedly and this won’t be educationally healthy for students. Fortunately, the school ended its exam before it joined the strike, else students would have failed successfully as prolonged idleness paralyzes initiatives. Most students during this  break have not been up to anything tasky and even those willing to learn have been restrained day after day with the hope that the strike would be called off soon.

Milords, the defending counsel might tag me a villain to a movement of general importance but a person’s toothache means more to the person than a famine in China which kills a million people.

Yes! Such questions should not be asked at all.

My lords, it is true that the nationwide strike which is entering its third month soon has caused more harm than good most especially for the Nigerian students many of whom have become idle and indulge in shameful acts, however, the question that ‘should ASUU FUOYE chapter have joined the nationwide strike?’ is a question that should never be asked.

Truly, Federal University Oye-Ekiti (FUOYE) is new and just budding and its teeming growth should not be quickly disrupted by such crisis as the nationwide ASUU strike particularly as the strike may be of no direct benefit to the institution’s chapter.

It is noteworthy to recall that in 2017 when FUOYE chapter of ASUU joined the then nationwide strike for the first time ever, the agitations of ASUU then were of no direct benefits to the university’s chapter especially since what was being fought for was the implementation of an agreement reached in 2009 of which FUOYE was just established in 2011.

Similarly, as a result of non-implementation of consensus reached before the strike was suspended in 2017 another strike has been embarked upon since November, 2018 and is running to about three months now.

Needless to say, however, the fact that ASUU FUOYE chapter may benefit little or nothing from the ongoing strike is not a strong point to withdraw from the strike. The clear point is that if not now, the efforts will pay off later, certainly.

In furtherance, Milords, the decision of ASUU FUOYE chapter of joining the nationwide strike is not condemnable and should not even be contended at all particularly as ASUU is a Union whose strength thrives in collectivity and unity of member unions.

Like the Yoruba adage that says ‘àgbájo owó la fí n gbé erù d’orí; ajèjì owó kan kò le gbé erù d’orí’ (one lifts a load with both hands in concordance; a single hand cannot lift a load), the effectiveness or otherwise of the ASUU strike is dependent solely on the adherence of member unions so if every chapter pulls out one by one, the strike would merely be a farce and the agitations of ASUU would not be resolved not even attended to.

In essence, it is with the support of member unions like FUOYE’s and others that ASUU could stand firmly and aver, determinedly, the continuance of the strike till agitations are addressed!

Instead of wasting time contending if FUOYE chapter of ASUU should have joined the strike or not, what should be done is urging the Federal Government who has vividly prioritised the campaign for reelection over the academic and even overall welfare of the students’ populace to end the strike.

One of such ways is to support the campaign to end ASUU strike through the #EndASUUStrike campaign on Twitter among others.

CONCLUSION: This column is about you; it presents the two sides of a case courtesy of two writers from different schools of thought. “Audi alteram partem” means hear the other side before passing your judgment. Take the gavel, make your decision and slam because you are the Judge in this courtroom. You can vote for the scribe whose argument you adjudge better by using the poll option below and forward your comment in the comment box below.
SHOULD ASUU FUOYE HAVE JOINED THE NATIONWIDE STRIKE?
Send comments and suggestions to 09031753963, 08149049858 or your verdict to thecourtroomng@gmail.com.
Good news: Because we are for you and you are for us, you can now bring cases to the Courtroom by suggesting topics to us. Any of mail, text or WhatsApp is just fine. We cherish you!