THE DECLARATION OF JUNE 12 AS DEMOCRACY DAY – A SMART MOVE? 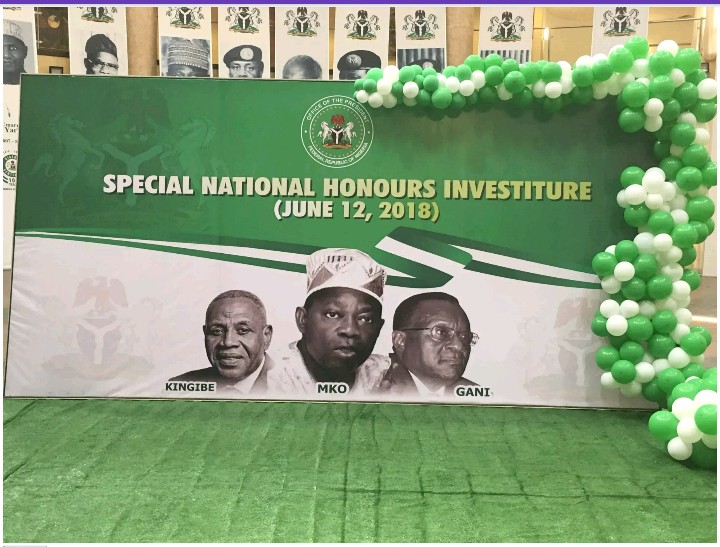 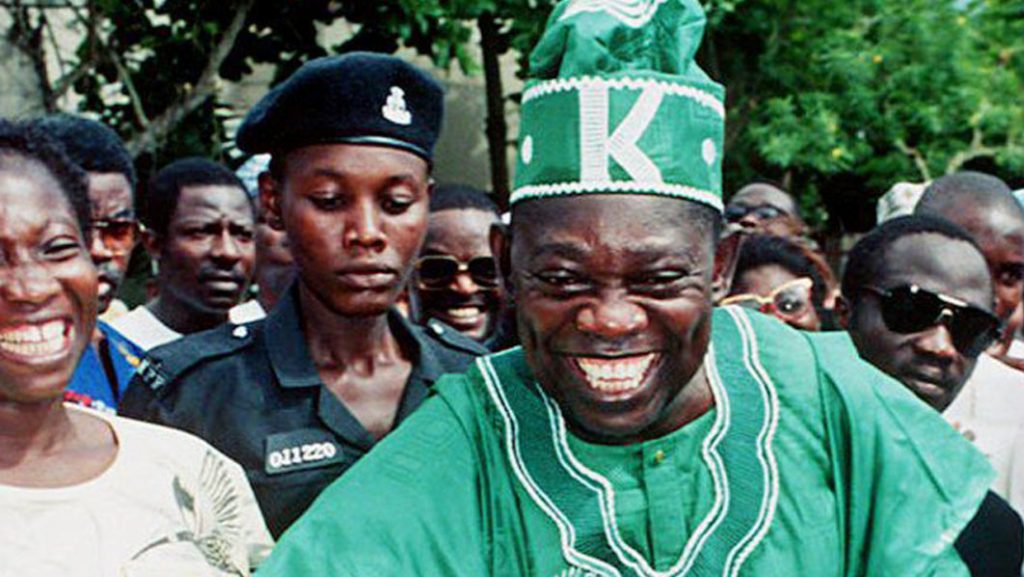 DEFINITELY, IT’S A NO BRAINER!.

“Biro balo loogun odun, otito yio ba lojokan (Were falsehood to have begun marathoning for years, it would take only one purposeful pace from the Truth to catch up with it.) – saying of the Yorubas.

The year was 1993. 1993 was the year religious affiliation had no stand. Abiola and Kingibe were Muslims but not even a Christian remembered. 1993 was the year ethnic tie had no knot. Abiola, an Egbaman, earned the vote of folks with whom he had no blood or lineage bond – the Easterners were Abiola’s, Northerners were his, Southerners rooted for Abiola. 1993 was that year democracy was freely and fairly played in the Nigerian political pitch of play. 1993 was the year. June 12 was the date. Moshood Kashimawo Abiola was the man.

Indeed, it is a smart move. The declaration is brave. Buhari did what many past administrations have not only failed but have feared to pass. Obasanjo, whose Presidency was on Abiola’s sacrifice, feared to deliver this mandate. Rather than reward his compatriot’s match to martyrdom, and in himself decorate himself with the Laurel of Martyrdom, he looked elsewhere – in the direction of May 29. In comes Yar’Adua. Longevity snatched the chance from him. By the time the man who had no shoes from Otuoke came in, he had other things in mind. Well, all that has been thrashed in the bin of oblivion. Kudos to Buhari for finally giving Nigeria’s democratic wilderness some light. A smart move it is, indeed.

Also, why won’t it be a smart move? After many lives were lost in the aftermath of the annulment of 1993. Hunger spiked. Hopes were blown away like elubo on a windy night. Dreams were shattered. The voice of the people was gagged. Now the dead had been raised for what seemed like eternal slumber to wrestle with his own nemesis, to whip them with defeat for the pseudo-victory they thought they had snatched – not in their grave but in their lifetime. Your Honour, just one move was needed to appease the aggrieved and to incarcerate the accursed. That move is the declaration made by President Buhari in this past week. And that, Your Honour, is, indeed, the definition of a smart move.

To buttress the aforesaid, permit me to invite Sam Omatseye to the witness box. He is one of the many whose fate were battered on the backlight of the year of annulment. He recalled: “I am a personal testimony. On hunger, I had it. I lost my job like many others when the soldiers shut the gates of the Concord newspaper, Abiola’s publishing firm. That was one of several such stories I recall of my suffering. I could not forget I had to trek several miles to draw a debt because I could not afford molue. I had to walk back, weary-legged and starving, because my debtor was not in the office. Several other stories.” Indeed, Your Honour, one of the ways to give succour to persons like Sam is by immortalizing the hero whose death they exchanged for sweat, hunger and even death.

In some quarters, it has been claimed that Abiola himself was not a hero, and that the annulment was what he deserved because his own hands too weren’t clean. Let it clear that all these are speculations. They are devoid of clear-cut evidence. And, in fact, whether or not Abiola is a hero is not of concern here. What concerns us is did the people’s resolve stand? And the answer is a straight no. Therefore, the posthumous reward on Abiola is not a function of what he is speculated to be but the choice which the people prefers.

Recalling Nee Pereira’s poem, Legacy – contained in the Crucible of the Ages – she captured it well. Tell me “why should this not stand? Here lies its celebration. Needless contention…for this bond; unconstrained by time and space is conditional, assured, gratifying and endless.” In all, unveiling June 12 as the new face of democracy is what should have stood long ago, and is a major step to retrace and rediscover our bearing after long years of political wilderness.

NO, NOT AT ALL

It does not take a 7 x 50 binocular to see that the theatrics behind the Nigerian politics is of the same plot. Every four years, politicians come wearing big shades of laughter and unreal attention. During this period, they are suddenly capable of doing many things ranging from eating at a local restaurant to visiting rural areas suffering paucity of electricity and water. More often than not, they would start a project which would last so long as the election persists. All these they do, just to gain the acknowledgement of your thumb. They just want in, or want back in.

On the 6th June, 2018, President Muhammadu Buhari took the “bold step” of changing the democracy day from the erstwhile May 29 to June 12. Listen to the president: “June 12th was the day when Nigerians in millions expressed their democratic will in what was undisputedly the freest, fairest, and most peaceful election since our independence. The fact that the outcome of that election was not upheld by the military Government does not distract us from the democratic credentials of that process.”

Although many would queue behind the President to agree that June 12 carries more democracy bearing than May 29, the important question here is upon what intention was this change effected? It is clear, without doubt, that the President is merely trying to appeal to the emotions of those from the South-west so as to gain their support for the 2019 elections. The import of the name Moshood Abiola resuscitates the memories of a magnanimous man who won the 1993 elections, but was denied his rights, locked up and eventually died in prison. There is hardly a way his story would be narrated without calling for pity. That was the way I heard it, and many other people whose thumbs are now ripe for ballot harvesting. It appears this same reason is the one which has guided the President towards the declaration.

Some, like my opponents, may argue that the intention – whether true or not – does not change the validity of the date – June 12. Yes, they are right. And this is why the onus of understanding rests on the bulk of the citizenry who would go out to vote. The onus to understand that the President’s declaration should not affect their choice of candidacy in the 2019 elections, as such declaration was not based on public interest, rather, personal pursuit. Or why else would he have chosen this period, when his term is about to lapse, to exhibit his patriotism? Ever since 2015, the actions of the Presidency did not manifest any thought of Abiola’s election, and yet he claims that this date, June 12, was far more symbolic to the Nigerian democracy that May 29. Haba, this is nothing but a display of sheer hypocrisy.

More to validate my stance, this year’s ramadan, the President in his love for the lazy youthful populace, and his unflinching generosity, invited few young Nigerians to an Iftar (breaking of fast – eating) session in his house. He felicitated and took glamorous pictures with them, which were eventually spread across the internet. Dear Nigerians, in 2015, there was Ramadan, nothing of such happened. In 2016, there was Ramadan, nothing like iftar with the youth. 2017 also queued behind these, and then 2018 – the year preceding who gets what and who goes home!

Furthermore, let’s draw this matter to the shores of law. There have been several valid arguments as to the legality of such declaration. In the eyes of the law, the 1993 election in context was declared null and void. This, in law, carries the import that such matter in context never took place. Thus, if the June 12, 1993 elections never took place, and Abiola was never even declared President, then all the Presidency is trying to do is to build something on nothing. And I am not alone with this thought. Professor Ben posited on June 15 that “June 12 election is deemed in law not to have taken place, and as such June 12 cannot be declared Democracy day and a public holiday”

This means that as much sympathy and pity that may be felt or exhibited, if the legally elected president – Muhammadu Buhari – is to go by law, then June 12 cannot be recognized as declared. Now, I ask, was such move a smart one? No, because we are not fools. 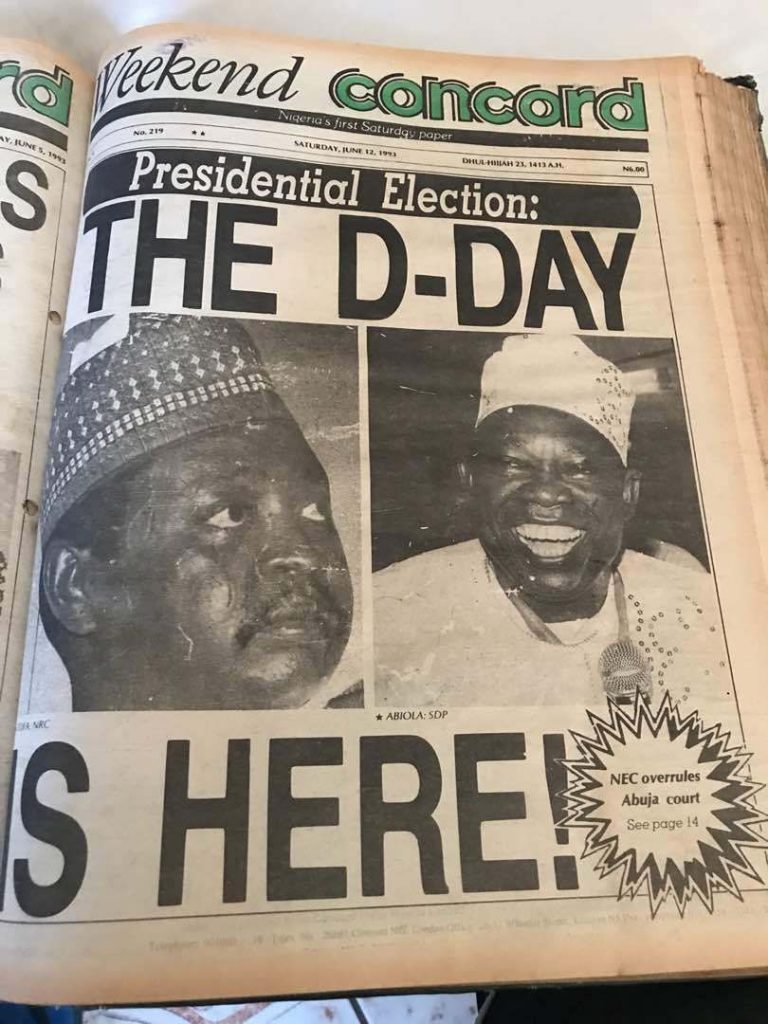 CONCLUSION: This column is about you, it presents the two sides of a case courtesy of two writers from different schools of thought. “Audi alteram partem” means hear the other side before passing your judgment. Take the gavel, make your decision and slam because you are the judge in this courtroom. You can also vote for the scribe whose argument you adjudge better by using the poll option on the website: www.courtroomng.org
THE DECLARATION OF JUNE 12 AS DEMOCRACY DAY – A SMART MOVE?
Send comments and suggestions to 090-327-88612, 090-977-55359 or your verdict to thecourtroomng@gmail.com