IS THE MILITARY RIGHT IN DECLARING IPOB A TERRORIST ORGANIZATION? 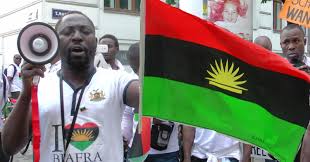 Case background
The green field of WhatsApp has been the grazing ground for its gossips. The blue sea of Facebook hasn’t lulled from its tempest. The blue sky of Twitter is blowing its wind back and forth.

What are we talking about? The recent declaration of the military of IPOB being a terrorist organization. This week, courtroom examines its rightness or wrongness. 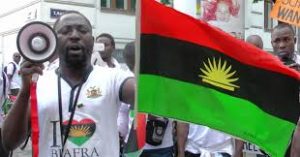 Milord, just when the 57th anniversary of “one Nigeria” stares at us in the eyes, the scars of 1970’s was peeled by some group. And by nomenclature they are the Independent People of Biafra, IPOB. In the bid to have their unguarded gragra deflated, however, the government declared them a terrorist organization. Many have pooh-poohed this move; but, Milord, I beg to differ. Because I must confess to you, remembering the agonies of the Civil War in the lines on paper which my retina has fed my memory makes my heart swell with sorrow. I will save you the reminiscence of this déjà vu.

After lives in their millions had been lost, Major General Philip Effiong, Officer that administered the Republic of Biafra, declared in a Peace Accord on behalf of every so-called Biafran – past, present or future – that, “we affirm that we are loyal Nigerian citizens…we accept the existing and political structure of the federation of Nigeria. Any future constitutional arrangement will be walked out by the representatives of the people of Nigeria. The Republic of Biafra hereby ceases to exist.” Underline “walked out by…Nigeria.” Meaning: in whatever guise the Biafran ideology resurfaces – MASSOB or IPOB – the Nigerian government is given the right to proscribe it. The government simply worked in accordance to the Accord the founding fathers of Biafra have concurred to. So the government’s declaration couldn’t have been more right.

Come to think of it what more do we call the activities of this group? Aside the formation of a Biafra Secret Service and Biafra National Guard, it uses weapons like stones, Molotov cocktails, machetes, broken bottles among others. A police Sergeant identified as Steven Daniel was killed by them. The Enugu-Ezike (Ogurute) Central Mosque was set ablaze by this same group. Milord, what do we call this if not terrorism? In fact, that The English Dictionary defines terrorist as, “a person, group or organisation that uses violent action, or the threat of violent action, to further political goals,” validates my claim.

To corroborate my point with an evidential flesh, permit me to call to the witness box Miss Bridget Anurika-Eze who lives in Abia, the stronghold of IPOB. She recounted her ordeal thus: “All my life I have never had a firsthand experience of public harassment like today…Before we knew it IPOB boys rushed out from nowhere and attacked our Hilux…carrying different weapons…and started dragging us out. Ever seen or witnessed any jungle justice? That’s exactly the scene today,” she recounted bitterly. “[These] boys are terrorizing us their people – the Igbos. Most of [these] IPOB boys are touts and thieves…Until there is a legal way to go about this thing, there will be no peace,” she went on to bemoan. Milord, with this, I don’t think we need to haggle rightness of the government’s declaration.

I must also come out clear that I’m not ruling against the rule of law as you might likely hear at the other end of this noble Courtroom. Neither am I too inhuman to understand the concept of human rights. Far from it, Milord. But one thing is dear to us than anyone’s right: our sovereignty, our unity and our national security. So let no one come here to blow the trumpet of “injustice to one is injustice to all”. Should the sound of such trumpet crawl into your ears, please, kindly remind the trumpeter that human rights loses it numero uno status once national security is under threat (ref: Dokubo-Asari V. Federal Republic of Nigeria 2007).

If it said that the action of the government is another Boko Haram in the making, I have just one response for that. And that is the submission of George Simmer that: “Si vis pacen para bellum” – if you want peace, you prepare for war.

During “Uncle Jona’s” administration, we all tongue-lashed him for awarding the Beast of Sambisa with strength by his silence. We all faulted him for being a Panicker-in-Power rather than being a Commander-in-Chief. Shall we not appraise the decision of the government to browbeat another beast from feasting on us from the Southeast? Milord, this is the way we can lobotomize the hate virus threatening to make our national sanity a patient to the psychiatrists. 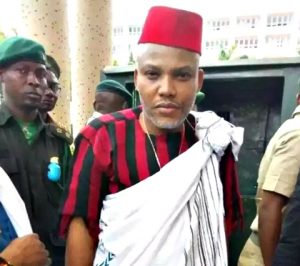 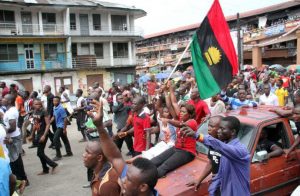 You can lead a horse to the water, you can’t force it to drink – Anon.

My Lords, you can only lead a horse to the water, you can’t force it to drink. These people cannot be forced to stay. Declaring them a terrorist organization is only to worsen the matter, not a right step in addressing the issue.The activities of the Indigenous People of Biafra hereinafter referred to as IPOB, have brought them to lime light in the past few weeks, under the leadership of Nnamdi Kenny Okwu Kanu, widely known as Nnamdi Kanu. This limelight I speak of is not the one that just acknowledges the existence of these agitators, but rather the one which puts them on the tongue of every concerned individual, as to why or why not they think the agitation is uncalled for. The Defence Headquarters of Nigeria (DHQ), being an advocate of the former, branded the IPOB with the undeserving logo of being a “militant terrorist organization” on the 16th of September, 2017, and I have come here today to challenge such declaration.

My Lords, the only thing uncalled for here, like a fanciful funeral for a stillborn, is the declaration made by the DHQ. Asides the fact that the declaration defies the law of due process, it does not, in fact, duly possess a point of validity on IPOB. Terrorism, according to Merriam Webster Dictionary, is the systematic use of terror especially as a form of coercion. This concept has, however, attributed some key features over the years, such as: the bearing of arms and ammunitions, detonating bombs in some selected parts of the country and kidnapping citizens, all in the name of achieving the goals of such terrorist organizations. These are the features that subsume Boko Haram, Al-Qaeda and ISIS under the tentacles of terrorism. These are the same features lacking in the activities of IPOB. Little wonder Russell Brooks, the spokesman for the American Embassy in Nigeria, told Sunday Punch on 22nd of September, 2017 that the US government does not view IPOB as a terrorist group. My Lords, coming from a country that has felt the heat of terrorism from the vicious hands of Boko Haram, it is, without doubt, far-fetched and mere absurdity to have branded these set of IPOB agitators with the name terrorists.

While this persists, let us, for a moment, take a careful look at the activities of the Fulani herdsmen, who have been invading farmlands, killing citizens of the state and raping women. Simply put, they have been unleashing terror in states of the country in a serial manner. Daily Post, in July 2017, reported Samuel Ortom, Benue State Governor, stating that no fewer than 1,878 people were killed by Fulani herdsmen within three years, with over 99,427 households affected in the various attacks carried out by the Fulani herdsmen in the state. My Lords, I’m not here to argue the precision of such figures, but one clear thing is that these killings happened and households have been affected. Yet, the government has not deemed it wise to tag these herdsmen terrorists. Rather they have referred to these acts of theirs as mere “criminal activities” according to Garba Sheu, the President’s spokesperson. I would have been surprised, but then, a former President once also said “stealing is not corruption”. So, welcome to Nigeria where we all venture into technicalities when the truth affects us.

Furthermore, the declaration of the DHQ in question, which has the government’s support, is more of a witch hunt, if not totally one. Such a step opens the door of imminent danger on the agitators for IPOB. Since the government has declared that they are a terrorist organization, they have become par with terrorist groups such as Boko Haram. As such, anything that could be meted out on Boko Haram could be also be done against IPOB agitators. My Lords, isn’t the word terrorism too grave a name to slap on the faces of these agitators? But then Nigeria is a funny place where we throw titles around like tantrums. After all, singers who never stepped foot on the shores of medical school now bear doctors.
And let the opposing counsel save us the cliché of “the government is acting in the National interest”. There are no National interests and there have hardly ever been. Nigeria is made up of alphabets added together. The mathematical combination of a+b+c does not change, unlike Figures that could be added together to form a whole. We are all letters of different origins and IPOB have decided to spell secession.

Moving on, when government fails to address their needs, ASUU takes to strike as their last resort. For students, they shut down the school gates. We have also seen workers, adults, take to the streets and suspend their sense of shame for a little while. In short, anybody can be mad and daring when they dearly want something. All this is in the mighty name of “fighting for our rights”, and from the history so far, it is those with lesser bargaining power that usually suffer for fighting, like IPOB, like students, but this does not in any way erode the validity of such rights to demand. These people and every right thinking Nigerian have been singing the song of restructuring to the deaf ears of the government. Now they want to secede and go their way, government calls them terrorists. So what exactly?

My Lords, you can only lead a horse to the water, you can’t force it to drink. These people cannot be forced to stay. Declaring them a terrorist organization is only to worsen the matter, not a right step in addressing the issue.