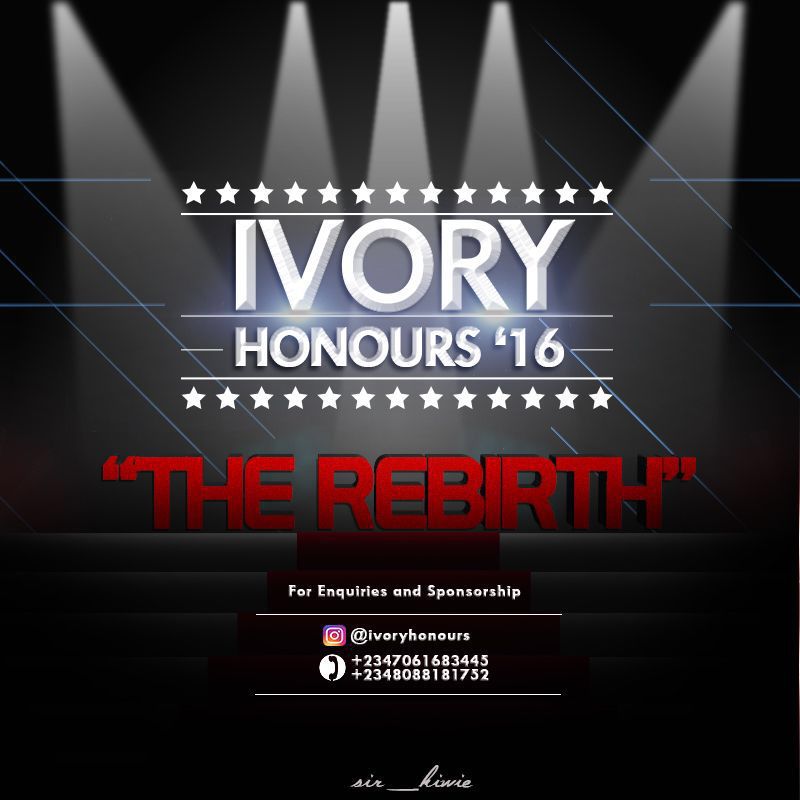 As the latest victim of inexplicable public hate, the released list of nominees for the year’s Ivory Honours event has been hit by a firestorm of controversies. Just like the martyr, Stephen, stones of abuse have been hurled at the organisers and they bleed for the sins of these naysayers. Some even call for the whole conception to be scrapped. However, if we all were to allow our minds to be colonised by the wholesome light of logic, we would realise that it is an event of which the entire campus is in dire need.

While it would delight me to open the scripting of my arguments with a flashy display of overwhelming aesthetic beauty, it is best for me to leave such to the relentlessly diligent organisers of the event. That is what they are known for. As for me, let me tell you the story of an academic prison. It is one in which you and I have been jailed for quite a while. In this prison, inmates are shackled with chains of pseudo-intellectualism and forced to place their worth solely on the contestable results of tests and examinations. There is close to no avenue for natural talents and vocational enterprise to be celebrated. In today’s cut-throat human resource market, it has become increasingly crucial to develop and recognise certain skills beyond the ex nihilo world of the classroom. The sadistically repressive nature of academic torture on campus is mitigated by this event. Thanks to Ivory Honours, we can finally award Alien Nation for their rambunctious energy on the dance floor, we can reward MC 2Talk for repeatedly sending us to Jaja for treatment for cracked ribs and thank Capitol Media for immortalising our memories through the magical power of a camera.

Furthermore, the afire enthusiasm with which it has been accepted in some circles proves its ultimate importance. We all forget one very important feature: it is characterised by the culture of students honouring themselves, quite true to its name. It is a classic case of students making something of their own and defining the paradigms with which to determine their own successes, albeit for a second. That, if you ask me, is something that must be encouraged. It joins the likes of Junior Chamber International’s FOPA as some of the campus’ important treasures. It gives us something to be excited about. Its controversy is its own virtue. It has normalised the idea of students awarding themselves so well that we have learned to own our authority over such things, enough to protest when we feel certain people have been overlooked. If we did not care, we would not protest. Would we not be hypocrites to ask for it to be cancelled just because of a few perceived mistakes in its early days? Einstein would not be happy with such logic.

More so, it is another social avenue for students of Unibadan to converge for a cause of common interest. Equivalents of this award are countless in other schools and just like over there, it will help generate publicity within and outside the campus. It injects life into the impotence of our social health on campus. By creating a categorisation that slices through the kaleidoscopic walls of our social circles, it births a musicality of interests, thus uniting the student-body. And through the publicity of this incredible phenomenon, it helps the world see the University of Ibadan become a trending topic in the blogosphere. This is the part where some people may bring up the idea of Ivory Awards, not to be confused with Ivory Honours. While the latter is concrete, the former is a joke, the kind that fades into thin air, accompanied by applause and laughter.  One wonders what the Students’ Union is doing about that, by the way. Or is it part of Mr. President’s refusal to “blow horns”? Anyway, Ivory Honours takes its place, keeping the flag of the campus flying in the social world. And no one would deny…we really do need more social activities on campus. Even if we are not sure the Students’ Union agrees.

No one is saying it is not flawed. But no one should be advocating for it to be scrapped either. Even our academic procedures on campus are not without embarrassingly erroneous steps. All we can do, all we should do, is help contribute to the improvement of the integrity of the award by offering opinions on the inclusion of new categories and processes of selection of nominees.  It is an infant in need of nurturing, not torturing. What makes more sense: asking for the entire event to be cancelled or helping to improve the quality of subsequent editions so as to serve the students of the campus better? You must permit me to drop my pen at this point, My Lords. Let me leave you now to prepare for the event. We would not want to miss it now, would we? In the end it’s about the work, not an award you get for the work ~ Linda Fiorentino

One of the deepest quotes I have ever read is that which is popularly known as the serenity prayer and was authored by American theologian, Reinhold Niebuhr. It goes thus: God, grant me the serenity to accept the things I cannot change, courage to change the things I can, and wisdom to know the difference. But I wish to add as well that: Dear Lord, do not forget to grant me the courage to change the things I should and the wisdom to shoo unacceptable nonsense whenever it shows up at my doorstep. The Ivory Honours is definitely a thing that not only can be changed but MUST be changed if wisdom be our compass and sense be our guide. I have never seen a more clap-inducing claptrap. Jeremy Bentham, were he alive today, would have generously bestowed upon it his famous title: nonsense upon stilt.

In the month of April, we saw a lot of fuss about what was then tagged ‘The Ivory Awards 2016’. But for reasons still unknown and to the disappointment of many – the nominees especially – the event never took place. Some days ago, exactly on the 24th of August and like a wrestler doing a Chinese get-up, another list rose from the waters and was welcomed with even more noise. This one is called “Ivory Honours ’16: The Rebirth”, but I fail to see what is born-again in this rebirth. I really think the organisers should have tagged it “Ivory Honours ’16: Street Ti Take Over” instead. That would have been more accurate indeed.

Milords, what is acceptable in a concept which promotes shamelessness, which apotheosises frivolities above intellectual ideals? It baffles me beyond reasonable bounds. And it – I mean this culture of celebrating trifles –has become commonplace even within such hotbeds of conservatism as the faculty of law. Really, if a man wishes to shed tears for my generation, he does not have to look far. He only needs to have a look at our award ceremonies. Out of all the categories, only 1.4% (and this is rounded up) is cerebral in nature, and that is ‘poet of the year’. Most of the others are just farcical and downright indefensible. This singular blunder speaks volume of what are our priorities. We complain daily that the government is not paying attention to education but what is the point of fasting for the sake of one whose lips are never dry?

Categories such as comedian of the year, most sophisticated (whatever that means), streetboy of the year (really?), hourglass of the year, couple of the year, most sought after etc. paint us as a bunch of confused, jobless lads who are not sure what to do with their time. For the love of God, if we are not careful, we will graduate into greater ordure and celebrate even baser qualities. Starting like this, we may find ourselves rewarding political thugs, call girls, drug addicts of the year and God knows what in the near future.

We are told the awards are for ‘distinguished persons in the school deserving of an award and worthy of emulation’, a way to ‘reward productivity’ and ‘recognise excellence’. Please wake me up. What irony! Are they suggesting that the most excellent among us are the singers, the sexy and the sassy? Is this University of Ibadan, the fountain of knowledge, or a mere replica of MTN Project Fame? I still wait to see how nominees in categories such as ‘hourglass of the year’ canvass themselves for votes via the social media…

Asides the crimes of moral anaemia and intellectual kwashiorkor, this exercise called Ivory Honours has also contravened basic electoral norms – the principle of one-man-one-vote particularly. How can it be fair when your victory is not determined by how many persons deem you worthy but how many times each person thinks so? It may be argued that the voting process is transparent but even this is doubted when one of the nominees happens to be the host of the voting webpage. Please pardon my naivety but since when did it become acceptable to house the polling booth in one party’s headquarters?

With as many as 73 categories, the award, for me, has lost its taste and prestige. Not only that, I also dare submit that it is objectifying and sexist. It is sexist until it not only celebrates the female hourglass figure, but also the male six-packs and phallus. Many things are wrong with Ivory Honours milord, so many that I understand why they decided to settle for ‘ivory’ in a world ruled by gold medals and diamond rings. I would have recommended that the organisers meet with the brains behind JCI’s Fifteen Outstanding Persons Awards for proper orientation, but I reckon they might be tempted to trail the path of narcissism and Dunning-Kruger effect like our ‘Right Honourables of the celestial sixth assembly’. Anyway, what’s my business?
CONCLUSION: This column is about you, it presents the two sides of a case courtesy of two writers from different schools of thought. “Audi alteram partem” means hear the other side before passing your judgment. Take the gavel, make your decision and slam because you are the judge in this courtroom.