NO, ANOTHER MISPLACED PRIORITIES!

As I commence, I would love to state categorically, that TIJANI, Oluwamayowa Emmanuel is not gay and by the grace of God would never be one. My family, Mellanby hall occupants, and a few ladies in the faculty of Law, Arts and Agric can bear me witness. Whatever the content of this article is, it is just a standpoint of a concerned Nigerian citizen who is as straight as a ruler!

The past few weeks has painted the elaborate portrait of the conscience of the Nation called Nigeria. For many years, she has attempted taking a stand on same sex marriages and relationships, but always bent due to pressure from the international community and Religious Nigerians. But all of that compromise came to an end on January 7th, 2014, as Dr. Goodluck Jonathan signed to law the proposed bill against all odds. Prior this time, I imagined a typical Yoruba owambe marriage, where Aso ebi would have been chosen, where dowry would be ready, where mogbo moyas would be poking in, all to witness the marriage of Samuel and Emmanuel, and all I could say was God forbid!

However, the passage of the anti-gay bill to law, which has raised a lot of eye-brows, is also not the solution to our gay problems. This legislation may on the long run do us more harm than good, due to the fact that it infringes on private lives of all Nigerians gay or straight. Since that bill was passed into law, it has given Law enforcement agencies passport and visas to our private live to pry into what goes on in and out of our “bedroom”.

A very disturbing part of this legislation is the outright abuse of the Nigerian constitution which happens to be the supreme Law of the Land. In the 4th chapter of the Nigerian constitution, there is right to Private and Family Life, it states expressly: “The Privacy of citizens, their homes, correspondence, telephone conversations and telegraphic communications is hereby guaranteed and protected.” This of course is gone.

The constitution in the same chapter also gives right to peaceful assembly and association, saying: “Every person shall be entitled to assemble freely and associate with other persons, and in particular, he may form or belong to any political party, trade union or any other association for the protection of his interests…” We can’t belong or form any association fighting for human rights in the homosexual directions without having 10 years up our sleeves, which obviously means we are straying the constitution, and trampling human rights.

Science has it that some persons are born with genetic dysfunction which makes them exhibit some gay traits, these persons though few, exist in our communities. This begs the question; should these persons be sentenced to 14 years in prison by virtue of their birth when our constitution expressly states that; “No citizen of Nigeria shall be subjected to any disability or deprivation merely by REASON OR CIRCUMSTANCES OF HIS BIRTH” I trust you know this is a gross neglect of the legal document that binds us as a Nation; the constitution!

Even when we decide to overlook all of these excesses, the 14years in jail is definitely not the best punishment for such offenders. History has taught us, that the best of homosexual activities take place in prison yards, so jailing homosexuals is giving to them the best grounds and situation to perpetrate their pre-supposed vices. Therefore I can say with outright confidence that this law is nothing but another episode of misplaced priorities from our brothers in the corridor of power. Gracias! 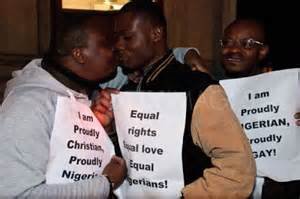 YES, A GOOD AND FAIR PANACEA

When a vertical stream of audacity falls over the edge of a steep place, it creates eddy currents which are enough to generate statements capable of extinguishing flames of cowardice. The recent political statements made by President Good luck Jonathan has once again proved his critics wrong; the critics who believe that he is a General who revels in the loch of pusillanimity. His stand and stance about the same-sex marriage has generated a lot of disparaging comments from world leaders, majority of them emanating from the West.

It all started in May 2013 when Nigerian lawmakers passed a bill outlawing same sex marriages; the bill was however signed into law on January 7, 2014. Nigeria’s new Same Sex Marriage (Prohibition) Bill bans gay encounters and clubs and threatens public displays of same-sex relationships with up to 10 years in prison. Person who enter into a same-sex marriage contract or civil union face 14 years prison if convicted. The New law emphatically states that: “Only a marriage contract between a man and a woman shall be recognized as valid in Nigeria”.

The anti-gay law has been widely received by Nigerians as a tow in the right direction as it conforms to the ethical, religious and cultural beliefs of Nigeria. Despite the fact that Nigerians are against the same-sex marriage; a miniscule proportion of Nigerians believe that the punishment for those caught in the act is to the extreme. They are of the opinion that fourteen (14) years is not in direct proportion to the offence and that it cannot even stop them from being gay.

Lending from the words of Theodore Roosevelt which says that; “To educate a person in the mind but not in morals is to educate a menace to society”. It is a known fact that once liberalism is on the increase, it downplays the results of morals. To have a developed country, there is a need for an informed and disciplined citizenry coupled with accountable and transparent leaders. To have leaders and followers that will make up a great nation, an acceptable standard of moral ethics is required. The so-called harsh anti-gay law is focused at ensuring that the country is devoid of all acts of ludicrous immorality. It is an act of ensuring that citizens see the education of morals as a compulsory subject.

Inasmuch as the lawmakers have deemed it fit to attach 14 years of imprisonment as the worthy punishment for those who partake in same-sex, it will be unfortunate for citizens to downplay the efforts of the government by tagging the law as being extreme. It will serve as a deterrent to law breakers and curb the obnoxious acts of Lesbian, Gay, Bisexual and Transgender in Nigeria. If compared to the life imprisonment proposed by the lawmakers of Uganda for the same offence, it is an understatement to call Nigeria’s stand as a fair one.

For those who have decided to feel sentimental about people involved in LGBT all in the name of likely victims of hormonal disorder. From every day dealings with different individuals, it is believed that a minute of existent humans have such medical dysfunctional behavior. The other cases are majorly psychological and entrenched in the strongholds of addiction. This addiction to an ignominious act of this magnitude is similar to smoking which implies that it is injurious to the health of the person involved. It is only commonsensical for such people to seek for help from medical professionals and consultants in a bid to escape the grave consequences of same-sex marriages. A rethink about the significance of 14 years which can be used for secondary school education (6 years), First degree (4 years), M.Sc and PhD might jolt the LGBT community to their normal senses.

CONCLUSION: This column is about you, it presents the two sides of a case courtesy of two writers from different schools of thought. “Audi alteram partem” means hear the other side before passing your judgement. Take the gavel, make your decision and slam because you are the judge in this courtroom.
14 YEARS: A SOLUTION TO NIGERIA’S GAY PROBLEMS?
Send reservations, comments and suggestions to 0813-224-5150 or 0813-697-3059 or dcourtroom12@gmail.com