THE COURTROOM- ASUU STRIKE: WAS IT WORTH IT AFTER ALL?

ASUU STRIKE: WAS IT WORTH IT AFTERALL?

YES, IT WAS WORTH IT AFTERALL!

Education is the Passport to the future, for tomorrow belongs to them that prepare for it today—MALCOLM X
He who does not know the past is likely not to respect the present and of course, may be punished by the future. Anyone who did not know Nigeria in the days when there were no mobile phones, may really not appreciate the “miracle” of receiving a call from a brother who arrived Lagos and called to say; “I am now in Lagos”. Those days, my Dad was a frequent traveller, and once he travelled on Monday, we would just have faith that he would arrive safely. Though our hearts will not rest until he arrives on Friday! We who have experienced this miracle would work towards greater miracles in the future, unlike those who see it as a norm.
The same applies to the Academic Staff Union of Universities, ASUU. Many persons who do not know the plight that characterized the past of this Union will not really appreciate the most present realities and her “little” victories. But if you happen to be a student of history, a passenger of time, and a scholar in tune with the annals of posterity, you would agree with me that the six month strike was worth it afterall.
The principal reason why many students and pundits do not agree with the fact that the strike was worth it, is due to the fact that many persons opine it has wasted a lot of time and that this would consequently affect the future. But here is what history teaches; “if you don’t learn a lesson, history would not repeat you, it would only repeat itself”. If we don’t relax and win a battle over incessant strike actions, we would only be postponing evil days. It is on record, that in 1984, ASUU was concerned about the moral and political decadence that beclouded the Nigerian future and she cried out in a publication tagged; “how to save Nigeria”. In this publication, the union diagnosed the problems of the Nation and proffered solutions. But as usual, the plan was short lived as the government of the day played deaf to the rumbling sounds of agidigbo, the proverbial drum. This decadence was sure to find its foot in the academic sphere of the nation and this was exactly what ASUU was ready to stand against.
However, this led to the victimization of ASUU officials back then. The likes of Late Prof. Festus Iyayi, Attahiru Jega and other officials back in the day were arrested, detained, tortured and even had their international passports seized over this same matter. Yet there were little or no results to show for those struggles. Little wonder why the Late Iyayi wrote: “THOSE WHO CARRY THE CROSS FOR SOCIETY ALWAYS GET CRUCIFIED IN THE END!” He was more or less “crucified” in the struggle but his death however gifted the union an unprecedented zeal to continue in the struggle, so much so that even his wife, Mrs Grace Iyayi said; “Though Festus is gone, the struggle must continue”.
What did you lose to this strike that made you think it was not worth it afterall? You lost your time? Your plans were disrupted? You probably lost a scholarship? But my question for you is this; did you lose a life? If persons laid down their all even to the point of making the supreme sacrifice just to get a result, which was gotten, then it would be a disservice to posterity if we say such a quest was not worth it afterall. If Education is the passport to the future and our passport is faulty now, then the future we are rushing to will be nothing but a mirage. The strike was worth it. I rest! 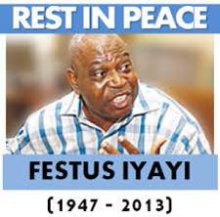 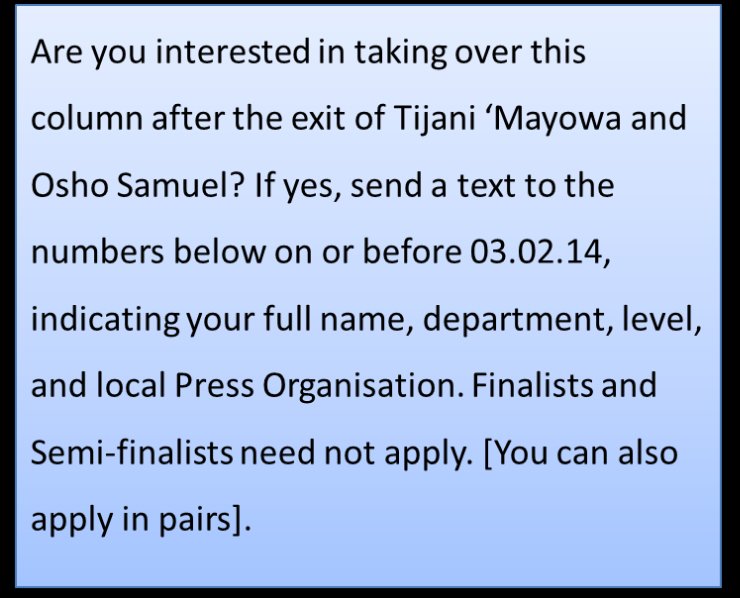 NO, IT WAS A MERE WASTE OF TIME!

The year 2013 will go down in history as a year that the rotten state of education in Nigeria got exposed for all and sundry to see its dimensional qualities; how deep in quagmire it has been, for how long it has been in financial dire straits and how the stench of its archaic squalor stings a healthy nose. The Public Universities in the country experienced a highly unprecedented strike which lasted for 5 months and 2weeks. The members of Academic Staff Union of Universities (ASUU) started the record-breaking industrial action on July 1, 2013. Meetings upon meetings, several committees were setup and myriads of conclusions were reached at different times until the strike was finally called off on December 17, 2013.
The strike is over but it leaves behind the trails of apparent negative effects and potential positive proceeds. Many opined that the strike is a struggle for a better educational structure in Nigeria and that the proceeds will at least help students in the future. I would say that the strike has done more harm than good to the students and universities at large. As we all know that the only qualification needed for enrollment in the Devil’s workshop is to be idle. The strike ensured that students were kept idle for more than five months and some of them became victims of vices. They might have gotten involved in menacing activities just because of the idleness that was in the atmosphere. The strike crept in when it was least expected. It happened in a subtle manner because it seems like it was going to end soon.
Another obvious deleterious effect of the ASUU strike is the massive disruption of school calendars. Taking students of the Faculty of Law as case study; some final year students of Law from other schools did not get as lucky as their counterparts from the University of Ibadan as they missed out on Law School admission. The strike ensured that these final year students missed a whole year and their chances of meeting up with next year’s admission date is in doubt. The slots available for admission into Law school are limited and it gets complicated when the penultimate class battles with the final year students for the limited slots. The strike resulted into postponed graduation dates, delayed matriculation ceremonies and prolonged internship periods.
The fact remains that the problem bedeviling the educational sector of Nigeria goes beyond the issue of money; it is a clear picture of a dent in the administrative prowess and dearth of intellectual property. Majority of the brilliant heads in the University have been stolen by the government to oversee affairs of the Public. There is an excessive involvement of academicians in governance which in itself results to an intellectual community bereft of sagacious minds who can positively impact the coming generation. ASUU lamented about the lack of infrastructures in Public Universities and I wondered how these Universities have managed to get accreditation for their courses. Is money really the problem? I doubt it. The Universities must have bribed their way through the accreditation processes which depicts the height of corruption experienced in the educational sector. If the broom of transparency and accountability is not used to sweep the corridors educational sector clean of corruption, then the dividends of the strike may never come to fruition. The wait is not worth it because these thorns of corruption were not uprooted before the seeds of progress were sown.

CONCLUSION: This column is about you, it presents the two sides of a case courtesy of two writers from different schools of thought. “Audi alteram partem” means hear the other side before passing your judgement. Take the gavel, make your decision and slam because you are the judge in this courtroom. WAS THE STRIKE WORTH IT AFTERALL?
Send reservations, comments and suggestions to 0813-224-5150 or 0813-697-3059 or dcourtroom12@gmail.com