THE COURTROOM – HAVE WE ENTHRONED A MAD MAN?

HAVE WE ENTHRONED A MAD MAN?

NO, TOO SOON TO JUDGE!

It is with great sense of humility that I commiserate with the conglomerate of Nigerians at a time like this as we mourn the exit of a literary Colossus, a consummate patriot and an unmatched intellectual sage who painted the portraits of the precariousness of the human existence with his story telling acumen. I celebrate the Eagle on the Iroko tree himself, Prof. Chinua Achebe, an alumnus of the premier university, we need not cry out our eyes until they are red but we should rather take solace in the imperishable footprints evident in his literary works.

Good day Lords in the temple of justice, the case brought before me this day is about the newly inaugurated President of the University of Ibadan Students’ Union. I have heard the chanting and the screams of the watchmen of the Ivory Tower; they are so loud to my ears like the resounding echo of justice. What are these innuendoes and vociferous altercations all about? I took time to interpret the hand-writings of my kinsmen on the walls of the University. Staring at my face are the declarations that we have enthroned a mad man. I was first jolted by this declaration from the lips of the masses. The President has spent barely a week in office and has already been declared a mad man who needs restraints. I would like to ask for more lucidity as to the definition of a mad man in this context. Is he a dictator, an autocrat, a tyrant or a leader by the rod of iron? Irrespective of the class he belongs to, I make bold to say that it is too early to conclude or decide the trend of a journey meant for 365 days in a week. Who does that? Myopic or far-sighted individuals!

Nigerians are popularly known as individuals caught in the cobwebs of hasty generalization over the years. Worthy of note are the loads of invectives catapulted against the coach of the Super Eagles, Stephen Keshi when he failed to win his first two matches at the just concluded African Cup of Nations in South Africa. Nigerians at home and abroad castigated him and painted him as one who lacks the intuition to lead the Nigerian football team to success. Little did they know that the rejected team would still be crowned the kings of Africa on the podium of excellence with the songs of victory on their lips? It is just too early to conclude that Babatunde Badmus is a mad man.

In the heat of the electioneering process, these same Uites were clamouring for a hard man who they believe will be able to table their demands before the school management. These same set of individuals kept screaming about the gentility of Edosa Ekhator, they called him a school head boy who is timid to face the school management. Now you have chosen for yourselves this day a man whom you believe has the intellectual prowess and mettle to lead fruitful dialogues and protests.

If at all he is a mad man, then he must be from the generation of intellectual mad men that have one time or the other in the history of human existence revolutionized the world. Before you conclude the movie, I will beckon on you to please watch more scenes and reach the end of the storyline. Take your time before you pass your judgement. It is just too early to conclude. 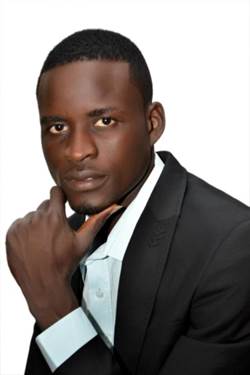 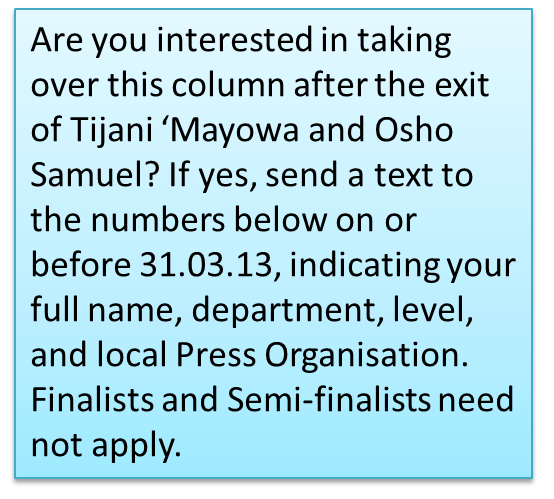 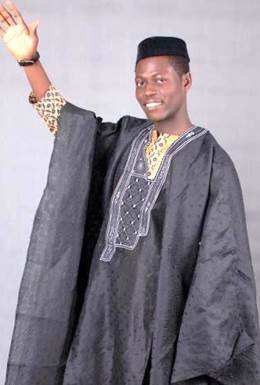 The term “mad” was first used to refer to great men and women who worked the commercial revolution of Madison Avenue, their impact, role and theatrics in the development of the World leading economy. They were called Madison men but as time took toll, they got the short version; “mad men”, all for the good they did. However, the word mad has degenerated to mean otherwise, to mean a state of mental disorder to mean insanity. Then, you would begin to wonder what class of “mad” does the Student Union President belong.

I am afraid he has been said to belong to the latter. It was on the day of the Students’ Representative council election for the office of the speaker, that I got a call from a concerned Alumnus, he said; “Mayowa, what is happening at the Chambers I heard there is fracas…” I didn’t know what was happening, so I rushed to get information from the Chambers and all the people I met repeated some phrases from time  to time, phrases like; “e ti dibo fun were” [You have voted a mad man], “a leopard can’t hide its spots, you have enthroned a thug”. The shock of the day came for me, when a Babatunde Badmus faithful said “I am disappointed in BB, we have voted a temperamental President”.

Time and ultimately chance would not permit me to tell the full story what happened in the house that fateful day, but for the President to have violated all expected procedures and trespass beyond his jurisdiction in an attempt to [unjustly] influence the election by harassing the erstwhile speaker and disobeying several house injunctions in a rather rude manner has shown some level of insanity and power drunkenness.

What kind of President barges into the hallowed chambers in the course of a sitting, disrespecting all sane protocols and tells the principal officers of the house to meet him the conference room immediately? All I am saying here does not even begin to tell the story of the madness that ensued in the house that night, hence the reasons why many think power has made Babatunde Badmus mad.

However, I have not said, Akinmulegun Samson, Buluma Ayokanmi and all other actors in the degenerating movie are saints, but no one expects faeces to come out of the mouth, the same way we don’t expect the head of more than 20,000 students to do some unreasonable things.  I am not writing to antagonize the President and call him all sorts, but to sound a note of warning, that we cannot continue to act like our “Fathers” in the National Assembly and expect the different results, like Einstein says; it is sheer madness.

The Yoruba people would say; “a mad dog destined for destruction will not heed the whistle of the hunter, even if the whistle is a trumpet”. My whistle today to the President is this; having got all these debasing comments from the majority in less than 5 days in office and considering vox populi vox dei [*the voice of the people is the voice of God], please gear your radicalism towards the fight against oppression and tyranny not against the students you swore to serve, it will not do you any good to interfere further in the issues of the house. Rather put your own house [The Executive Council] in order. I rest! As I hope you do not take after the proverbial Yoruba mad dog! [Eni a wi fun Oba je o gbo!]

CONCLUSION: This column is about you, it presents the two sides of a case courtesy of two writers from different schools of thought. “Audi alteram partem” means hear the other side before passing your judgement. Take the gavel, make your decision and slam because you are the judge in this courtroom. HAVE WE ENTHRONED A MAD MAN?