THE COURTROOM – ADEWOLE’S ADMINISTRATION SO FAR: A SUCCESS OR FAILURE?

ADEWOLE’S ADMINISTRATION SO FAR: A SUCCESS OR FAILURE?

Good day my Lords, I would love to first apologize for bringing this kind of case before you, we all know with no shadow of doubt that my colleagues effort to justify the Adewole tenure is just an attempt to rationalize mediocrity and tyranny, but like you my Lords would say; audi alteram partem, hear the other side, so I agreed that we give a room for fair hearing.

I make bold to say, that the silliest thing I have heard this year is the statement; “Adewole’s administration has been a success”. My Lords, please tell me what is the success in an administration that frustrates the wellbeing of its people and sees to the depletion of their commonwealth? One who welcomed us to a new tenure via a 5-weeks disrupt in the peaceful academic calendar. One who gloats over the downfall of her own sons? One that sees an academic institution as a profit-making firm, neglecting the fact that her worthy graduates are her profit! One in which a lot is done, but not in the good of the majority.

This administration reminds me of “eyin Adepele” [The irregular dentition of a Yoruba figure], too many failures to number. What do we say of an administration that saw a record breaking amount of extra-year students to the tune of many hundreds just last year? One which cannot maintain the worthy academic standards of time past?

As if academic fall out was not enough, the Adewole admin went on to set up policies that has seen vast majority of students become fugitives in Agbowo, Ajibode and its surrounding hamlets. The administration even has a penchant for failing with her promises. At the last town hall meeting, we were promised that we would no longer use the manual course form for registration, that we would join our 21st century folks in using just the online format. But as we all know, students still loiter lecturers’ offices all to sign course forms, wasting precious time on obsolete 20th century ideas—first and best indeed!

What can I say of the deliberate attempt to gag our million voices, by serving undue SDC letters to innocent students and postponing their hearing all to stall them from joining their counterparts in the just mobilized youth service exercise? What do we say of the “about to be increased” fees? Erratic power supply in Hall one and two, indiscriminate felling of trees, poor library services with books that should be in museum, our litany of woes is endless!

My Lords, I strongly submit that the Adewole administration has been a massive failure and I make bold to say that if there is anyone out there after all these who still believes the administration is a success, such persons sanity should be called to question. I REST! 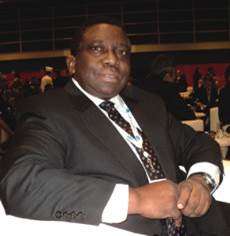 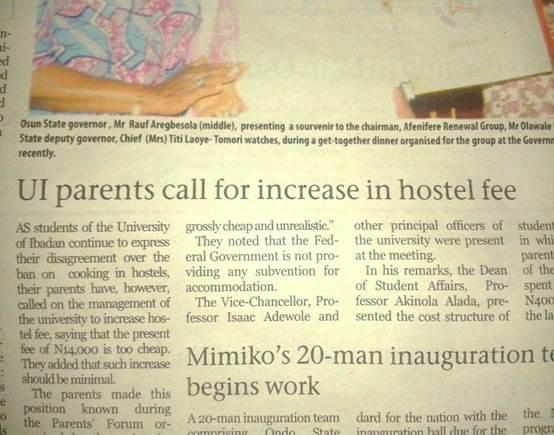 In the silence that reigns in the early hours of the morning that precedes the breaking of a new dawn, the only sound we could hear was the soft tick of the clock. Tick-tock says the clock of the Ivory Tower, minutes turned into hours, hours turned into days, days turned into weeks, weeks turned into months, months turned into years. It is now a little over two years that the renowned OB-GYN specialist, Prof. Isaac Folorunso Adewole was given the opportunity to hold the reins of affairs of the premier university. How time flies!

In the wake of his administration, majority were of different views concerning his ability to surpass the achievements of the erstwhile Vice Chancellor, Professor Olufemi Bamiro. Some lamented that the shoes left by his former boss were too big and that it looks like a canoe for Adewole’s feet. If Adewole himself was given the rare opportunity to prove himself in a bid to highlight his numerous achievements, he will do it in an overtly superb manner. Nemo judex incausa sua – one cannot be a judge in his own cause; as such I have been saddled with a huge task of showing you the successes of Prof. Adewole’s administration and paint them in ITALIC BOLD CAPITAL LETTERS for the world to see.

Once upon a time, the land of UI was a place where darkness reigns; the walkways, corridors and halls of residence drenched in utter gloom. The installation of inverter powered light bulbs in halls of residence has made the days of gloom a thing of the past. Adewole-led administration also ensured the installation of inverters in departments and their lecture theatres to power some appliances and projectors. This in a large extent has helped departments and faculties to minimise the amount of money spent on fuel for generators.

In terms of infrastructural development, Adewole’s administration never failed to soar past the 80-percent mark. One of the obvious manifestations of this is completion of the awesome architectural edifice, the International Conference Centre which hosted this year’s matriculation ceremony. A lot of beautiful buildings have been erected in several faculties in a bid to add to the aesthetic property of the community.

Taking a closer look at the Kenneth Dike Library, it was during Adewole’s administration that the library commenced the 24-hours service which is a laudable move towards the ideals of a 21st century institution of learning. Of note is also the on-going installation of the Closed Circuit Television in the library to monitor the movement of students and mitigate theft cases perpetrated by some of the Library users.

In times past, the intellectual sages of this community are known by the colours of their old rickety so-called official cars. Adewole led administration acquired new plush cars that snugly fits the class of erudite scholars and illustrious academicians who are worthy to be called our Deans of Faculties. In the area of Sports, Adewole’s administration was instrumental to the creation of the UI Football club, a football club registered with the Nigeria Professional Football League (NPFL), it is a momentous achievement which has portrayed the intellectuals in the University community as individuals who can participate actively in Sports.

The climax of all is the fact that the current administration in just 2years has made UI marketable to the outside world by giving UI ventures a facelift. University of Ibadan can now boldly boast of the UI bread, UI table water, UI dry fish and many more. I can boldly say without an iota of doubt that Adewole’s administration so far has recorded tremendous success

CONCLUSION: This column is about you, it presents the two sides of a case courtesy of two writers from different schools of thought. “Audi alteram partem” means hear the other side before passing your judgement. Take the gavel, make your decision and slam because you are the judge in this courtroom. ADEWOLE’S ADMINISTRATION SO FAR; A SUCCESS OR FAILURE?