THE COURTROOM- PATHFINDER TEAM HAS FAILED?

PATHFINDER TEAM HAS NOT FAILED!

“The good old days are gone, the mighty are fallen, the men are too old for war, and the women are too feeble for battles our universities are filled with babes and suckling”.

These lines were culled from an article I wrote months before the re-inception of the Students’ Union in our University. I was the opinion that having the shadows of those good old days was impossible. But the Tokunbo Salako led administration fondly called the PATHFINDER TEAM has proven me wrong.

Many have criticised that the Union did nothing, but I would be quick to ask them; what did you expect from the Union? The Union had no predecessors who could put them through the bottlenecks of Unionism, yet they thrived. The first achievement of this administration is the sustenance of the Union, ensuring that she did not die prematurely under their care.

The Tokunbo led Admin. has also ensured an awakening of Students’ consciousness just like the Subsidy removal did to the Nigerian Populace. We had experienced in this University time and again, when things go wrong and students Protest, the leaders of the protest were automatically being served SDC (Students’ Disciplinary Committee) letters. This made students shrink into their shells even in the face of unfavourable conditions. This changed with the electricity protest being the first of its kind in a long time in the University’s history, the Examination/Boko Haram Protest, the Subsidy protest and many more.

The pathfinder team were also able to spice up the social life of UItes which was obviously next to non-existent. Even a blind man can see the handwritings of these executives on every facet of the University.

Though the Union faced several challenges in its early stages which included a deceptive N100million Union account which eventually had zero balance, the Union still rose above all its challenges and went on to be the Voice of students, reclaiming the Students’ Union Building, reducing Zoological garden gate fee, reduced transportation fares across the campus, the scrapping of Examination forms, improvement of electricity condition and many more.

I can therefore say with no shadow of doubt that anyone who says this administration has failed has committed a fallacy. 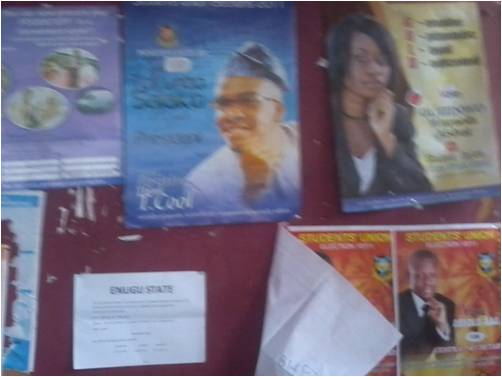 A decade of struggle landed us our beloved Students’ Union. The reinstatement of the union brought ecstasy to all and sundry, it was a dream come through. A lot was expected from the pathfinder team of the Students’ Union executives. They gave mouth-watering promises; they had beautiful manifestos, wonderful campaign strategies, campaign jingles that will give you automatic dancing shoes and knock you off your feet. Of a truth we saw creativity and innovation at its crescendo but they lost momentum. They littered the whole place with their posters, moved from room to room, hall to hall like Etisalat SIM marketers but they could not do so for their proposed newsletters. Misplacing their Priorities, placing entertainment jamborees before the main aim of Students’ Unionism, which is students’ welfare.

In a recent press conference between the Students’ Union President, Tokunbo Salako and UCJ, he stated clearly that Falade Babatunde (Bikerman) has been a problem from day one. It is a common knowledge that a house divided against itself cannot stand. From the President down to the Treasurer, they all played discordant tunes; you go for protests and notice that certain members of the executives are missing. You approach some of them with problems plaguing you as a student and all you hear are flimsy excuses. If you can’t unite eight (8) members of a board for a common goal then how can you unite over 8000 students? It came to a stage when all we could see is Tokunbo Salako; he was the secretary, the treasurer, the PRO and hence misplaced his priorities. All they loved was using their posts as articles of ostentation and walk down the aisle in high profile events like braggadocios. Uneasy lies the head that wears the crown, what was expected from these executives was for them to have a round table talk with their constitutions to remind them their responsibilities. There was a constant loss of touch between the executives and the students they were supposedly fighting for. Once they lost the touch, they could not feel the pains of the students and hence they could not maximise their posts for the students. How would it have been if the zeal and passion with which they conducted their campaigns was transferred to making their stay as Students’ Union executives memorable?

In conclusion, the Tokunbo-led administration claimed that a staggering N39 million was spent on the renovation of the Students’ Union Building. How do you expect us to swallow that hook, line and sinker? If N39million naira notes of money is been pasted on that building it would make a captivating scenario than what we have now. This administration has no doubt performed below par, posterity is taking notes for the records and I lament for the coming generation because it is obvious that this foundation is faulty.

According to the constitution, we were supposed to hold the Students Union election 30days after resumption, 29 days gone! What are we waiting for? You tell me we have a union and the terrain is as quiescent as this! Do we truly have a voice? We have got to check the microphone, the amplifier or the mixer. This is a failed administration!

This column is about you, it presents the two sides of a case courtesy of two writers from different schools of thought. “Audi alteram partem” means hear the other side before passing your judgement. Take the gavel, make your decision and slam because you are the judge in this courtroom. HAS THE PATHFINDER TEAM FAILED?